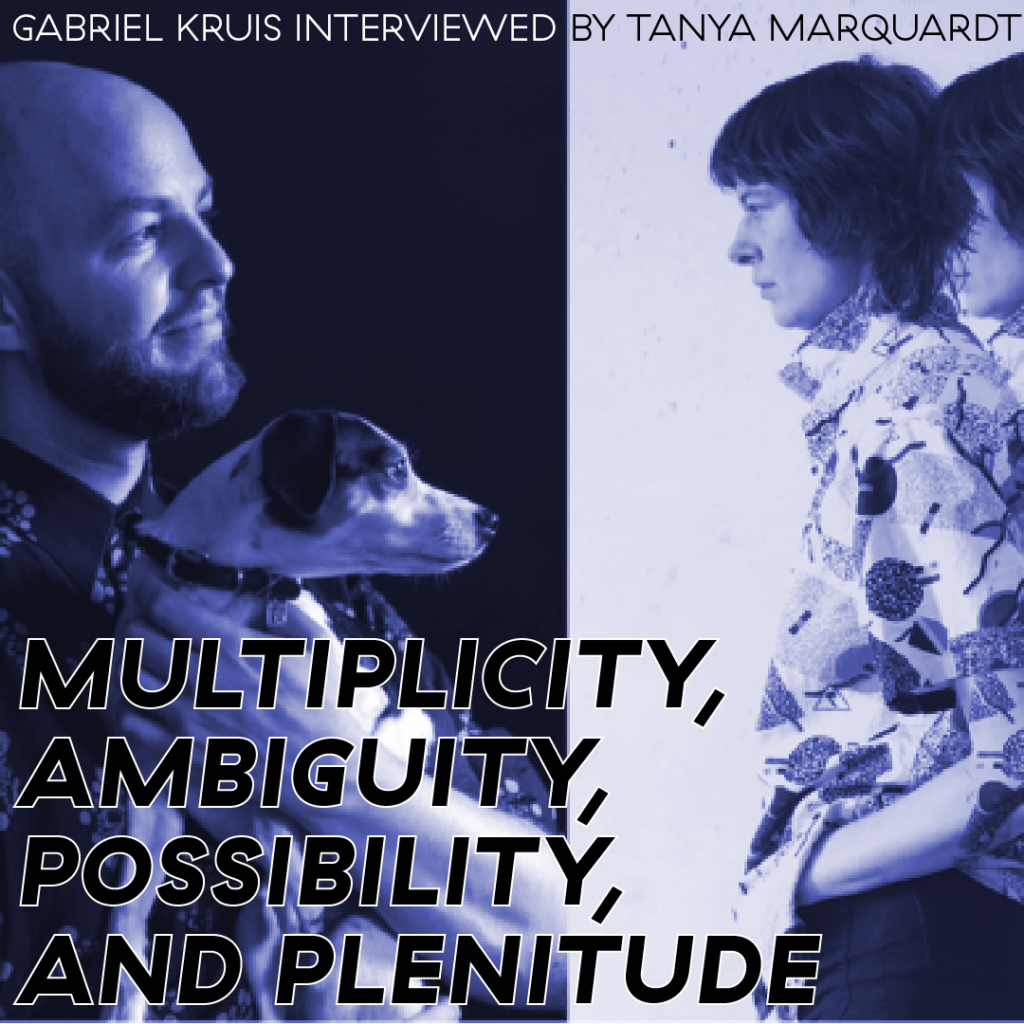 Tanya Marquardt: Okay. So I’m gonna start off with a few observations and if that leads into conversation great and if not I’ll go straight into notes.

Gabriel Kruis: Okay, go for it.

GK: The first 2 poems in Acid Virga are complicated investigations of exactly this question. A lot of the book is about the varieties of ego dissolution that occur in relation to friends and community, family and religion, landscape and the sublime, poetry and reading, love and drugs, the economy and the worker, or the artist and craft. I’m interested in how this “interbeing” turns duality or binarisms into continua.

The first poem, “Say,” for instance, is ostensibly by me, but is all quoted text: juxtapositions of other poets and writers thinking around a number of abstractions. The first line is Alice Notley’s, but the second could be attributed to as diverse a cast of poets as Wallace Stevens, Vanessa Place, and Kay Ryan. In total the poem is a kind of alchemical syllogism that begs questions about value, the self, the lyric, and the lyric “I.”

Because of this reliance or suffusion with others, it makes sense to me to quote briefly an email about this poem from my (lifelong) friend Ben after the book came out:

“What’s emerging is less of a dipole and more of a holistic, non-dual relationship… Meaning : poetry :: value : money :: money : ore :: concept of body : physical body. “Poetry’s a kind-of money” because, like money, its worth is rooted in a collective projection of meaning. (Also literally the book is $19.95 CA, so it’s sorta like cellulose bullion.) …  if you wrangle this poem, pick it up, turn it around and get a good look; what you’ll see is a quivering, voracious serpent circle. A sphere eversion, or — better yet — a toroidal eversion. A sinuous, transitive string of definitions with no beginning or end.”

I can’t think of a better definition of self than this final sentence. I also love how the Canadian price highlights the transitive nature of value here.

TM: And how does this relate to “memoir”?

GK: Right. It seems to me we value memories differently. But they don’t have a monetary value, unless they can be sold in the form of a memoir: cellulose bullion. The final line of “Say,” is “Poetry’s the body’s body” from Magnus William-Olsson. I like the idea that a poem, memoir, or any piece of writing being a kind of golem, out there in the world, somewhere between spit, mud, and holy writ. But I’m curious, as a published memoirist, how do you respond to this memoir-in-verse idea?

TM: When I first read the description I laughed because it felt playful. I thought, what about a memoir-in-limerick? Memoir-in-jest? It felt like a bit of a dig at the memoir genre, but I know you and so I knew it was playful. I have such open-ended definitions of memoir, but everything about me is open-ended: ½ man, ½ woman, ½ orphan, ½ writer, ½ performer. I think of everything as a revealing of self, of selves. Poetry, fiction, autofiction, cookbooks, travel guides, even instructional manuals. I think it’s all a way to write about all the versions of ourselves, all the ways we become and transform and just in the world. The curation of what goes where and how we tell stories and the ways they lay on the page reveal more about ourselves than about any one genre. When I read Acid Virga I just saw you on the page, the way your brain works, the way your body and your memories desire to be on the page, desire to leave whitespace or commas, imagery or memory. And that with the book, you seemed interested in using literature to express the feeling of ongoingness in your body — in relation to lovers you’ve had, the desert, your father, your sisters, Rush Limbaugh. That you wanted us to feel the sensation of suspension — a feeling I suspect you have all the time, right? Which brings me to me next question:

In Acid Virga you used commas almost exclusively which helped me feel this sense of ongoingness, even while the commas also broke up the writing. Tell me about that choice.

GK: Prose has historically felt like “the law” to me; poetry, like freedom. It felt it was possible to achieve what I wanted to in poetry because I made my own rules. I don’t totally know what the effect on the reader is of “breaking the law” like this, but simply being allowed to do so– allowing myself– had its own power. There were myriad reasons to choose the comma (as well as quotation, apostrophe, and capitalization), but I had the name “Acid Virga” in mind for a long time before publishing or finalizing the poems: when I learned that “virga” gets its name from a notation in Greek plainsong and likely the origin for our ‘apostrophe’ or ‘comma’ – a pause – I decided to really go for it and see how it shaped the poems. (I could have “repunctuated” them and they still would bear the mark of those changes).

A big inspiration for this decision was Descent of Alette by Alice Notley. In it, she exclusively employs quotation marks—to the point of exhaustion. That exhaustion becomes the texture of the experience of reading; it expresses something about the content on a sensory level. Descent was the most effective experience of defamiliarization or alienation I’ve ever experienced. Every word I heard or read for a while after had air-quotes hanging around it; every human act felt regurgitated, reused, recycled, sullied by human history and the various tyrannies which have made English such an ascendant language.

I’m glad you got the sense of “ongoingness” from this formal decision. Memories, thoughts, they don’t begin or end, they snake and morph, multiply and loop. I wanted to capture that feeling.

TM: This makes me think of your poem “The Rattler,” which appears in the middle of Acid Virga. How did the poem find its place in the book?

GK: Acid Virga is representative of a kind of freefall through the memories of its speaker (me; or a memory of me). The two halves of the book (“Waterfall effect,” and “Regression”) are formally inspired by the concept of “virga,” which are clouds whose rains vaporize before making landfall– due to temperature levels or a lack of humidity on a planet’s surface– so that the precipitation cycles back and reconstitutes the body of the cloud.

In content and in form, the book seeks to replicate this sensation of recursion; as a “memoir in verse” it’s about the intermittable act of remembering. By the time “The Rattler” appears, the reader has learned a lot about the speaker’s recent memories: a torrent of feelings about family, love, labor, and loss. These are things that happened earlier that night– a moment ago, last week, last month, or last year.

“The Rattler” takes us further back, in an attempt to excavate two formative memories which have become inextricably entwined. Each signifies the other and together they are emblematic of my experience of childhood. I wanted the poems in Acid Virga to build up momentum so that the end of any given poem feels like the bottom suddenly dropping out.

“The Rattler” is an early memory of a threat that looms, unfulfilled.

TM: Yeah, the poem feels like it’s about toxicity — the rattler’s venom, the violence of its death, of the ways you are taught, consciously and subconsciously, about how you can and cannot express masculinity. But at the end of the poem, it feels as if the dead rattler wanted to tell you something. It leaves the mark of something unsaid. What is it the rattler leaves behind?

GK:  I want to say: nothing is ever really over; everything persists as a virtuality, as memory, or history.

What the rattler left behind is the residue of itself; the possibility of its violence. The answer is hopelessly tangled with, yes, ideas about masculinity, desire, gender expression, safety. My father was a Christian minister and that’s what I listened to as a kid: his sermons and Rush Limbaugh. So it shaped and continues to shape and inform my understanding of America, its politics, and the moral frameworks of the Christian right. After all, before he died, Rush Limbaugh received a Presidential Medal of Freedom from former president Trump.

What he did to me—what listening to Rush Limbaugh celebrate the death of gay men during the onset of the AIDs epidemic did to me—on a primal, subconscious, intellectual, or spiritual level, feels too big to answer. So many of those answers exist in the negative space, as intimations and echos. As absence.

TM: Your father’s presence as a preacher, an impassioned orator, is very present in the early part of the book. Do your memories of church life and of your father complexify your current ideas of spirituality? How do these oratorical memories influence your writing life?

GK: As with “The Rattler”, the implications are difficult to disentangle. I received a love of language from listening to him preach, for sure; even Limbaugh showed me the power of language, incantatory, biting, and cruel as he was. But my mother also read to me every day of my young life and I can only guess how much that shaped me. I hope the gentleness, care, and intimacy I learned there are also present in the way I write. And my next project is actually based on exploring that space.

The fact is, I received a Christian cosmology from both of them and when I examine the psychodynamics that imparted the implications for the book are vast: the up/down, heaven/hell, christian/sinner, good/bad dichotomies are brutal, jarring, and have a precipitous impact on the way people think: on the American inability to reason. My experience is that they produce reactionary attitudes. A craving for certainty, and the false comforts that that entails.

On the one hand, it’s been a great effort to beginning thinking more “horizontally.” In another sense, I’ve just furthered this reactionary mode: the verticality of that style of thinking drove me to poetry, in all its multiplicity, ambiguity, possibility, and plenitude.

Gabriel Kruis is a New Mexican writer living in rural Northern Ireland. The author of Acid Virga (Archway Editions, 2020), he is a co-founder of Wendy’s Subway.

Tanya Marquardt is a writer and performer in Lenapehoking/Brooklyn. Author of Stray: Memoir of a Runaway (Little A, 2018), their work was nominated for a 2022 Pushcart. They are currently writing Creature (a memoir of selves).